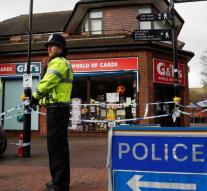 The Daily Mail newspaper suggests that Dawn Sturgess and Charlie Rowley may have found a hypodermic syringe. It raises doubts about the millions of cleaning costs that took place after the Russian former spy Sergej Skripal and his daughter Joelia were attacked with nerve gas four months ago in Salisbury.

According to Wallace, however, there is no great danger to public health. But Wallace also says that it can not be ruled out that there is no danger at all. Several places where the two in Amesbury and Salisbury stayed before they were hospitalized on Saturday are closed. Sturgesss and Rowley are still in a critical condition in the hospital.

Wallace concludes that the new contamination with Novichok has consequences for the English team that participates in the World Cup in Russia. Sport and politics must be separated according to Wallace.

Residents of Salisbury and Amesbury who were near the home of the injured couple, or who were near a park in Salisbury and an event of the Mennonite Church in Amesbury, are advised to wash their clothes. When it comes to clothes that have to be steamed, you have to wait a bit longer and the clothes have to be safely packed. When the attack in Salisbury on the Skripals came this call a week after it was clear that it was an attack with nerve gas went.