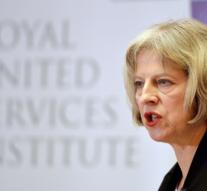 london - The British Conservative Party begins Tuesday at the first formal part of his leadership election, which eventually lead to the appointment of a new prime minister.

The 330 MPs of the party vote in the coming weeks on the five candidates who have raised. Every Tuesday and Thursday they choose their favorite candidate in secret, which ones fall off with the least votes. Next Tuesday must be clear which two candidates remain. Then the members of the party may make its preference clear in a rural ballot. In early September attracts new party leader as prime minister at 10 Downing Street.

Interior Minister Theresa May appears to have the greatest chance to follow David Cameron, who announced resignation after brexitreferendum. According to some polls would be 60 percent of the members choose her.