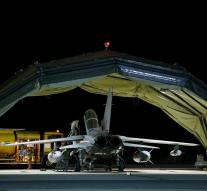 london - British bombers carried out their first air strikes on Syria. This happened shortly after the House of Commons on Wednesday agreed to air strikes on Islamic state in Syria.

A government source who wishes to remain anonymous, showed Thursday that an attack is made. Two Tornado fighter aircraft were then returned to the base. The source declined to say what were bombed and how many aircraft were involved.

Earlier it was announced that four British fighters had taken off from the RAF base at Akrotiri Cyprus. They flew in pairs and have an hour of each other left, said a witness told Reuters.

Prime Minister David Cameron on Wednesday received the support of 397 MPs for attacks in Syria. There were 223 voters. The British air force bombarded for more than a year statements of IS in Iraq and does so now in Syria.