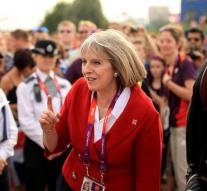 london - Britain next year will not be president of the European Union, has now voted the British people for a departure from the union. Prime Minister Theresa May has let in Union President Donald Tusk know, reported sources close to the British government on Wednesday.

Britain would be the second half of 2017 to assume the rotating presidency of the EU. Because the British people in the referendum on the EU chose a departure, which came to be called into question.

Belgium has offered to take over the presidency of the British.