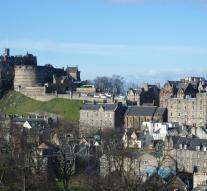 london - Edinburgh, Scotland, is the finest place in Britain to live. According to research from price comparison uSwitch. It bases the high ranking of the Scottish capital, including on the low crime rate, high salaries and high-speed internet. Cities like Bradford and Hull are at that level just very unpleasant and were at the top the list of worst residences.

uSwitch took 130 cities in Britain under the microscope in the field of 26 matters that affect the quality of life, including the amount of sunshine and life expectancy. Two years ago, 98th Edinburgh was still on the list. Very Scotland there is since then, however, considerably improved. In the top ten are seven places from Scotland.

Capital London is divided into different areas. The southernmost part of the city is seen as most comfortable, with a fifteenth place.