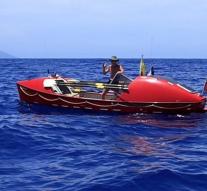 - The 53-year-old Briton John Beeden is the first person successfully non-stop to row across the Pacific. The tour began on June 1st in San Francisco and ended Monday after 209 days in the Australian Cairns. Beeden, who said that there were moments when he did not go to, grew an average of 15 hours a day and came nowhere between ashore.

After the 6100 mile trip to Cairns in northeast Australia, he tweeted: 10. Arrived at 00 pm local time. Happy to be back on land and eat some ginger biscuits. He added, blown to be the great reception which was prepared for him. Beeden: Wow, it's over. To be the first person to have reached something of this scale truly incredible and I still have not processed.

The Sheffield-derived Beeden, who now lives in Canada, grew four years ago, once the Atlantic. He had hoped his crossing of the Pacific Ocean to finish in less than 209 days, but he was hampered several times by bad weather.