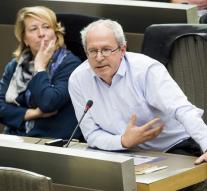 brugge - The municipality of Bruges will draw up a 'anti-loneliness plan' after the discovery, three days in a row, of three deceased people in their own house. Two women aged 47 and 80 and a 41-year-old man lay unnoticed at home for ten and thirty days, until the police had been warned by stench and flying.

The bodies were found last week. This month, we must plan to prevent such situations. According to Landuyt, it is not enough to encourage Bruggelingen to watch their neighbors. Especially because it was not just an elderly man, Bruges was scared.

According to VRIND, a Flemish government study department, 6 percent of the Flemish people say 'isolated from other people'. It's about 400,000 lonely people. 'That's a very big group. Living in a city is a risk factor, as it escalates the isolation to 10 percent of all residents, 'said a spokesman in newspaper De Standaard Wednesday.