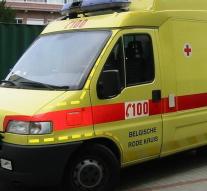 bruges - A honeymoon of a newlywed French couple in Bruges turned into a drama. The 25-year-old bride was before the eyes of her husband killed by a motorcyclist.

Laureen QUIBEL was only four days married her husband Remy writes Het Laatste Nieuws. They were in Bruges to celebrate the marriage.

They were so happy together, says the father of the woman against the newspaper. Terrible what happened with my Laureen. And Rémy saw his whole world collapsed before his eyes.

The accident occurred Tuesday when the couple wanted to cross a street. A bus stopped in the right lane to let the two, but a 20-year-old motorcyclist overtook the bus did not see them. He drove head-on into Laureen, which was thrown 15 meters through the air. She died in the hospital from her injuries.

The motorcyclist was not under the influence and would not have gone very hard. He should probably be accountable for the police court. For the husband of Laureen victim is enabled.