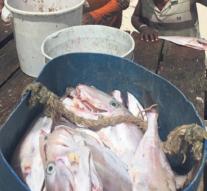 - A 54-year-old newlywed British died during her honeymoon in Mexico after eating the wrong fish.

The tragic story is reminiscent to that of the Dutch couple Jeroen Venema and Michou. They came earlier this year in the Dominican Republic after eating fish.

As in the case of the Dutch showed the fish had eaten Christine Fensome contain toxic ciguatoxin, reports the Daily Mail. Fish feed on toxic algae causing the ciguatoxin can end up on the board. People who eat the wrong fish have gastric, intestinal and neurological complaints. In addition to nausea and diarrhea can even experience hallucinations. It is usually treatable, but if it is thus waited too long, you can die out.

Fensome, who was on honeymoon with her 58-year-old man, had three children and five grandchildren.