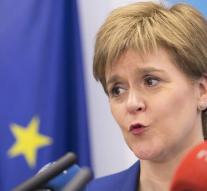 edinburgh - If London rejects Scottish conditions Brexit, Scotland should have the opportunity to vote for independence. That said Prime Minister Nicola Sturgeon Scotland Tuesday in response to the British government plans to leave the European Union.

Previously voted a majority of Scots in a referendum on EU membership.

Sturgeon wants above all that Scotland remains part of the single European market. Prime Minister Theresa May showed Tuesday that Britain is leaving the market correctly. That would be 'economic catastrophe' for Scotland, said Sturgeon. She wants to London the evidence is heard the voice of Scotland.

The Scottish Government is Thursday in London conclave on Brexitplannen.