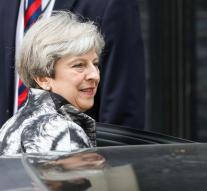 london - The discussions about brexit will begin on Monday. That has been communicated by the British Ministry of Brexitzaken and the European Commission on Thursday.

On behalf of Great Britain, Minister David Davis opens the series of talks about leaving the European Union with Michel Barnier, the negotiator on behalf of the European Commission.