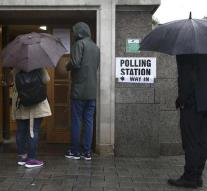 london - In parts of London and southeast England has severe weather caused major flooding. On the day of the referendum on membership of the European Union are flooded and streets are plenty of connections to the public transport curdled as the train to Gatwick airport south of the British capital.

It's still bad weather in the region throughout the night and morning expecting more rain than normal in a month. The authorities have warned of floods on the southeastern outskirts of London and on the left bank of the River Thames northeast of the metropolis include Havering is, according to the BBC's most eurosceptic municipality of the country. It is not known whether flooding has great influence on the preference of the voters in the region.

The newspaper The Sun which ruled in favor of leaving the European Union ('brexit), recalled that torrential rains may reduce the turnout figures. That could well come true proponents of the brexit, because they think they have a better chance with a low turnout. Outside the southeast of the country the weather is good, however.


The Sun reported Thursday morning that judging from the average of four different polls proponents of EU membership to be slightly to 51.25 percent compared to 48.75 for the brexit. But are an estimated 5 million voters outside these figures because they have not quite decided where they are going to vote for or against, the newspaper said. That would be about 11 percent of the voters.