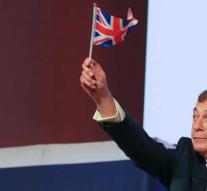 london - Great Britain has a new political party. It is the 'Brexit Party', which is officially registered on Friday and can therefore participate in elections. The party was already in the...

Farage, as leader of the UKIP (United Kingdom Independence Party), was one of the driving forces in the movement that the British want to get from the EU.

Farage said last month that he was prepared to return to politics as leader of the 'Brexit Party' if the brexit is postponed. In the current planning, the United Kingdom is leaving the EU on 29 March.