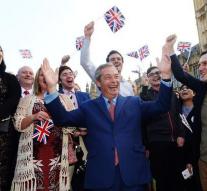 london - Britons will feel the results of the referendum on EU membership in their pockets. In many ways, life will be more expensive for the common man. Do not just go up prices, earnings, benefits and pensions will fall, is the expectation of many economists.

The Pound fell Friday to below $ 1.35, the lowest level since 1985. Imports are thus at a stroke become more expensive which also boosted inflation. To curb the central bank may decide to raise interest rates which homeowners are more expensive. According to Prime Minister Cameron would we care to an average of 1,000 pounds per year. Owners of rental housing will pass on higher interest rates to tenants.

Housing prices expected to fall by 10 to 18 percent over the next two years. Good news for people who for the first time to buy a home, but less positive for home owners.


The economic shock of a brexit can also lead to rising unemployment. That's according to several experts who were interviewed by the BBC lower wages as a result. The decrease could be placed in the worst-case scenario between 2.8 and 4.0 percent.

As a result of adverse economic circumstances, tax revenues go down. Should rising government deficits will be placed social security under pressure. Some families would, according to calculations can go a year to 2770 pounds on backwards. Pensions also come under pressure.