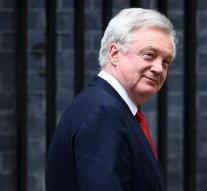 london - The formal negotiations on the withdrawal of the United Kingdom from the European Union begin next week, but possibly not on 19 June. On that day, the British government is supposed to present its program to the new parliament, said Mr David Davis, Brexit's minister on Monday.

Davis said Prime Minister Theresa May will conduct the 'big negotiations' on the brexit. His task will be to negotiate on the further elaboration.

Against the BBC, the minister said that Britain maintains the departure from the European internal market. The people want control over the boundaries and it closes the other. According to him, EU citizens in Britain and Britons in EU countries do not have to fear; London wants to reach agreement on their rights as soon as possible.

Negotiations on British withdrawal must be completed within two years. Davis kept the possibility of a break without agreement openly open. 'If you enter into negotiations without losing the opportunity, you will get a bad result in those negotiations. '

The European Commission did not want to speculate on the exact start date on Monday. 'That is not dependent on us. We are waiting. We are fully prepared and ready to start, 'said a commission spokesman. He reiterated the importance the EU attaches to removing the uncertainty for EU citizens as quickly as possible.

This week, 'technical discussions' will be held on the practical issues during the negotiations.