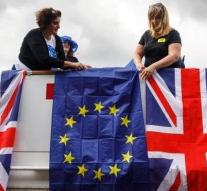 brussels - The European Union and the United Kingdom will resume negotiations on the conditions of their separation on Monday afternoon in Brussels. For the EU, this third round marks the 'clarification' of British positions.

So far, little progress has been made on the three points that must first be agreed: citizens' rights after brexit, financial settlement and future situation at the British-Irish border.

At the sensitive point of the brexit note, Brussels does not expect a breakthrough. The hope is based on 'some progress' around the calculation method. The British will give a (oral) legal analysis this week for the first time. Amounts are not yet discussed.

The British published a number of negotiating documents last week, including the border issue. EU officials are worried about the lack of 'workable solutions' in it. The 'invisible border' that London wants to testify to 'magic thinking.' '

Only if there are 'sufficient progress' on the three mentioned files comes the future relationship. The EU leaders will assess in October whether this progress is forthcoming. 'There's still a huge amount of work to do,' said an EU official. 'The clock is tapping. '