Home / World / 'Brexit is not a divorce' 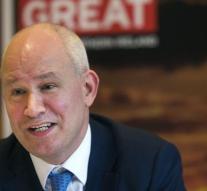 amsterdam - After five rounds, the Brexit negotiations seemed to be stuck in the last week. But the British ambassador to the Netherlands, Peter Wilson, does not fear that the trade relationship between the Netherlands and the United Kingdom has to suffer.

That's what Wilson says in an exclusive interview with this newspaper. 'There is a great unanimity between our countries. The Netherlands is, after Germany and the US, our most important trading partner. So we have mutual interests to maintain that relationship. '

Have we actually shot something over the last few months?

'I would say we have come a long way. That's what Michel Barnier said in his statement. Progress has been made on many technical issues. The problem is the money. '

As with any separation.

'I prefer not to divorce. We left a club, and we made it very clear that we will pay our part.

But the issue is twofold. There is a technical discussion about how high the obligations are. And a political question, namely how much you pay for it. We can only answer that if we also discuss our future relationship. We have taken steps in that. Now it is up to the 27 EU countries to take a step. '

But does the UK know what it wants? Within the Conservative Party there is a lot of disagreement.

'First, it's important not only to look at politics but also policy. There are fourteen reports published about current arrangements and how we would like to see them in the future.

In addition, it is perfectly understandable that there is a lively political debate in British politics. We make a fundamental change in our relationship with the EU. There is an active debate, the rest is all noise. '

You are the third trading partner in the Netherlands. Will this trade relationship continue?

'There are many similarities between our countries. The Netherlands is the largest investor in the UK after the US, still for France and Germany. What our relationship looks like then depends on the outcome of the negotiations. That is a political decision that is in the hands of all 28 EU countries. '

For a Dutch company with many British activities, it will not be a good feeling that 28 countries, often with a smaller trade relationship than the Netherlands, decide on that.

'It also depends on how you think about the foundations of the British economy. We believe that they are very strong. We have a good business climate. We are in favor of free trade, and this position will only be stronger when we go from the EU. '

Many companies consider investing in British investments or moving to the eurozone. Does this involve any economic risks?

'There are also companies that are going to focus more on the UK. Last year we saw the highest foreign investment ever in our country, after the referendum. In addition, world trade is growing slower than the economy. That is a sign that we should use more on free trade, no less. '

Why do you get out of a joint market?

'Because we want to negotiate freely with other countries. We want a stable and active relationship with our partners in the rest of the EU. The more open and the more freedom, the better it is for all of us. '

Are you afraid that the Brexit is damaging the British economy?

'That depends on how we leave. Every study that provides for the United Kingdom also provides for the EU. Saying where the damage is greatest is not an effective way of negotiating. We can better orient ourselves to mutual interests. '