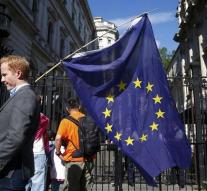 london - British Prime Minister David Cameron said the referendum as soon as possible to invoke Article 50 of the Treaty of Lisbon. That section of the law determines how a Member State can leave the union. The article states, inter alia, that the negotiations on leaving the union and how the relationship is further regulated, would be allowed to take up to two years. But the EU's departure after a referendum in 1982 of the 'small' Greenland, a remote place that exports mostly fish and a population as large as the city of Heerenveen, lasted only three years.

British proponents of the brexit as Boris Johnson and Michael Gove, have suggested that it is better to wait before picking up in Article 50. They want to carry out informal discussions with the other EU Member States, in hope that serious negotiations later run smoothly. They also argue that their country can take steps immediately, such as the exclusion of certain foreigners. But formally remains Britain in all ordinary members of the EU until the end of the two years of negotiations. That negotiation period may be extended if all 28 Member States so wish.

Article 50 states that the conditions under which Britain leaving the union must first be issued by the other 27 Member States. London's talking not about them in principle. The rest of the EU will try for example the rights of the nearly three million EU citizens in the UK to ensure the best possible.


The parting of the EU is also difficult due to the required consent of the European and the British Parliament on the final treaty of withdrawal from the union. London and when leaving the EU, it also says the Convention in which EU law is above British law. But should, according to the BBC certainly 80. 000 pages are terminated or maintained in some form of agreements with the EU. The parliament in London will want to steer that process.

The majority of the British Parliament is now in favor of EU membership. There are already MPs of various parties look together at how they can arrange a brexit where you notice it as little as possible. Priority here is that their country will remain part of the EU market. The brexit supporters think that breaking with the EU in 2020 could be a reality. Others fear that it will take decades.