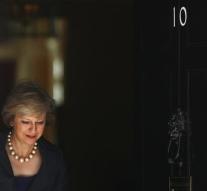 - French President Francois Holllande, German Chancellor Angela Merkel and Italian Prime Minister Matteo Renzi keep late August in Italy summit about the potential impact of the EU departure of Britain (Brexit). That Hollande announced Wednesday. He travels later this month by European capitals to discuss the brexit and in September there is an EU summit in Bratislava.

Wednesday Theresa May following her party colleague David Cameron as British prime minister. Both are opposed to the termination of membership of the EU, but a small majority of voters spoke June 23 for the brexit. May has said she wants to carry that wish. She furthermore said that she does not want early elections expires for the current term of the Conservative government in 2020.

Numerous British media estimate that May is pushing for a brexit with minimal practical impact, 'brexit lite '. May also would hesitate long with Brexit, while the rest of the EU wants them to hurry up in order to limit economic damage.