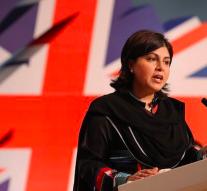 london - Baroness Warsi, former chairman of the Conservatives and former Minister in the cabinet of Prime Minister David Cameron, the brexit camp has turned his back. She is now for EU membership, the Financial Times reported Monday.

The baroness full Sayeeda Hussain Warsi called, finds that there is too much xenophobia among the opponents of EU membership. 'Lies, xenophobia and the politics of hate '' according Warsi give the tone in the campaign for the brexit.

She was herself before leaving the EU (brexit), but a campaign poster of UKIP (United Kingdom Independence Party) was a turning point for her. She saw it last week. The poster shows a huge procession of refugees who come to the EU. UKIP put there breaking point '' and inform the EU has failed. UKIP thus argues that London itself has to guard its borders by leaving the EU.