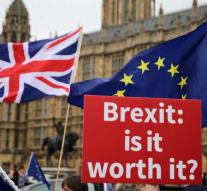 london - With the decision of the British government to leave the European Union, London has cost around € 560 million per week since then. This is stated in a study published on Sunday by the Center for European Reform. The center assumes, among other things, that the British economy is now 2.5 percent smaller in size than if a majority of voters voted for EU membership in 2016.

The study focused on the period from June 2016 to June 2018. According to the center, which claims to be pro-European but also critical, the British state has lost nearly 30 billion euros a year in revenue. That is approximately 560 million per week. Compared with similar economies, the British faltered since the Brexit decision. Economic growth in the first half of this year was the weakest since the second half of 2011.

Companies invest less and seem to be very careful with the approaching brexit, which is scheduled for March 29th. And there is still no agreement with the other member states on how and under what conditions the brexit is being implemented. British Prime Minister Theresa May saw her latest proposals resolutely rejected by the EU at a very painful summit in Salzburg recently.

Her Conservative Party is hopelessly divided about the usefulness of the brexit and how it should continue in negotiations with Brussels. Some party promoters then wish to leave the EU without agreement. May has called her party Sunday to unanimity for a good arrangement of the brexit. She did this in Birmingham on the first day of the Conservatives party congress, which lasts until Wednesday.