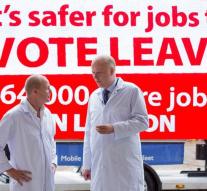 london - In the United Kingdom and Gibraltar on Thursday 46,499,537 people entitled to vote on brexit, whether Britain should remain in the European Union. The election in London relies on figures from 328 local election regions.

Most voters live in England: 38.9 million. Scotland has 3.9 million voters, 2.2 million, Wales and Northern Ireland 1.2 million. Gibraltar received 24. 117 people a ballot. The Channel Islands and the Isle of Man are not part of the United Kingdom, they are British crown possession and are as such not part of the European Union.