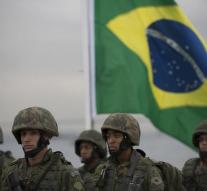 - The ten terror suspects who were arrested Thursday in Brazil, according to the authorities formed a motley crew. Justice Minister Alexandre Moraes called them,, utterly amateurish '' and said they still were totally unprepared for the actual perpetration of attacks. They did not know each other personally, but kept up remotely, for example via Whatsapp.

The group was on the radar of the security services because members visited websites that are linked to Islamic State. Also some members had social media show their sympathy for the terrorist movement appear. Then she seemed to make plans to learn self-defense sports and purchase firearms, the police intervened.

,, Brazil is not part of the coalition against IS, but because of the Olympics and the many foreigners who became the country will receive target, '' the minister said. The Games in Rio starting on August 5th and last until August 21st. Followed from 7 to 18 September, the Paralympic Games.