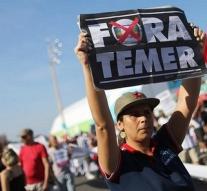 - The Brazilian stock exchange dropped 10% on Thursday. The market reacts negatively to media reports that President Temer has been involved in a corruption scandal.

A major Brazilian newspaper reported that there would be recordings of Temer who made a payment to Eduardo Cunha, who was following the resignation of former President Dilma Rousseff last year.

The tape would have been passed to the Supreme Court of Brazili by two members of meat processor JBS, according to the newspaper O Globo, as part of a deal with justice to reduce prosecution.

O Globo has not published image or sound. The president, acting as a temporary replacement of Rousseff, denies all allegations.