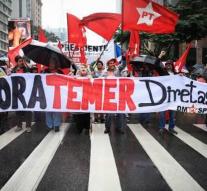 rio de janeiro - Following a call from unions and social organizations, in some fifteen Brazilian cities protesters have gone up the road to demand the resignation of President Michel Temer. The newspaper Jornal O Globo reported that there were demonstrations in, among others, Rio de Janeiro, São Paulo, Recife and Belo Horizonte.

The Supreme Court in the South American country gave permission for a survey of the Temer corridors last week. He is accused of agreeing to bribe an important witness in a corruption investigation. The news site O Globo has recorded a conversation between Temer and two senior employees of meat company JBS, who collaborated with the Public Prosecutor for self-reduction. That conversation suggested that Temer had paid silence.

Temer denied that he had approved bribery. He does not intend to step up on his own accord, he told this weekend.