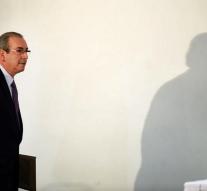 - Eduardo Cunha, president of the Brazilian Chamber of Deputies, on Thursday resigned. He was suspended on May 5 because of allegations of bribery and intimidation of MPs.

The 57-year-old politician is nota bene widely regarded as the driving force behind the impeachment of President Dilma Roussef. She has been suspended pending a parliamentary inquiry into corruption scandals in which she was involved. Vice President Michel Temer takes its responsibilities true.

The conservative Cunha delivered Thursday his resignation letter, as reported to the Brazilian media. He called the policy when he left rudderless.