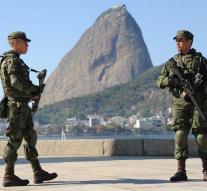 - Police in Rio de Janeiro in view of the Olympic Games from Sunday, received the support of 22,000 men of the Brazilian Armed Forces. In total, rounding the 51,600 men and women of the police and the army out to ensure the safety of the city and the Games.

Sunday opened the Olympic village in the run-up to the Games from 5 to be held 21 August in the city of 6.5 million inhabitants. That does not include the surrounding communities; there live another 6 million people. The first athletes who reported Sunday at the Olympic village in Barra da Tijuca, the teams were from Israel, Germany and Italy, according to local media. Barra da Tijuca is from the seventies dating prosperous modern district, situated on a nearly 20 kilometer long beach in the southwest of the municipality of Rio.

Thursday arrested ten people who were preparing to attack the Olympics on the internet according to Justice Minister Alexandre de Moreas. The threat of these suspects is now no longer taken seriously by the judiciary. The investigating judge responsible for the case, Josegrei Marcos da Silva, said, according to the Sunday edition of the newspaper O Globo that she could probably go home with an ankle bracelet.


Jihadism is not a topic in the country of nearly 205 million people live where barely Muslims. Criminal violence is a plague. Also, there are many tensions as a result of the very serious economic and political crises. The leftist president Dilma Rousseff has been inactive in May, pending a Senate inquiry against her. Acting President is Michel Temer.