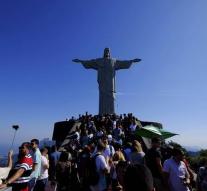 - The Brazilian government has frozen the bank accounts of the state of Rio de Janeiro. The board of Rio still needs to repay a substantial debt, according to the BBC.

According to the financial office of Rio de Janeiro, the state can not make payments more was repaid to the debt to the federal government. It would be an amount equivalent to approximately 48 million euros.

Governor Luiz Fernando Pezão last week announced a series of measures to get back on track the budget. These include a tax increase for pensioners and expensive tickets for public transport.

The state called earlier this year in the run up to the Olympics out of financial emergency. The government then shot the assistance with an emergency loan. Pezão has already announced to travel to the capital Brasilia to negotiate with the federal government.