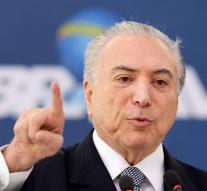 - A political ally of Brazilian President Michel Temer Friday resigned following allegations of abuse of power. Brazilian media reported Thursday that Temer itself is also involved in the scandal.

Cabinet Geddel Vieira Lima is suspected of influencing the decision-making on a large construction project in which he has interests. He would now resigned Minister of Culture, Marcelo Calero, are put under pressure to resolve a conflict over the planned luxury condominium. In a leaked testimony Calero Temer also accused of abuse of power, claim Brazilian media.

Temer told through a spokeswoman that he Calero has indeed sought to solve the problems of the real estate project, but in doing so did nothing onoorbaars. The political scandal is salient because leaked testimonies and tapes this summer led to the resignation of President Dilma Rousseff. Temer was the major driver of the departure of Rousseff.