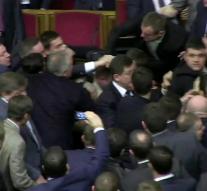 - In the parliament of Ukraine is meeting ended in a brawl. That happened when Prime Minister Arseniy Yatsenyuk Friday stood at the pulpit.

A Member of Parliament went to him with a bunch of flowers and handed it rough. He pushed the then prime minister from the pulpit and then tried him with one arm between his legs by pulling further away.

Supporters of Jatsenjoek shots to help, the assailant got a few taps and big uproar in parliament erupted. The prime minister kept himself- with flowers in hand- aloof from the scuffle.