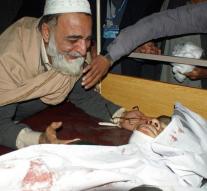 - The organizer of the massacre end of 2014 to more than 130 school children in the Pakistani city of Peshawar, has been in Afghanistan killed by an attack by a US drone. Which is heard in the circles of the security service in Pakistan.

Umar Naray (also called Khalifa Umar Mansoor) Saturday in Afghanistan's Nangarhar province was hit by rockets fired by a drone. He is seen as one that Pakistani Taliban fighters sent there by the school led by the army.

The Taliban could not confirm the death of Nuray.