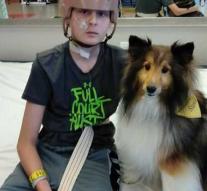 alabama - The parents of the 13-year-old Trenton McKinkley were about to donate the organs of their 'brain dead' son when he woke up from his coma.

Trenton suffered seven skull fractures in a serious accident with a cart and a buggy. Once at the hospital, he received four cardiac arrest and the attending physicians concluded that the boy was brain dead.

The cart was attached to the buggy when it flew over the head. 'I hit the concrete with my head', the teenager told Fox10. The boy can no longer remember from the rest of the accident. His mother says that the boy was dead for 15 minutes when he arrived at the hospital in the town of Mobile in Alabama.

The boy lay in hospital for days and doctors prepared them for the worst. The boy was brain dead for several days when his parents decided to donate organs to five children.

The papers for organ donations had already been signed when the parents of Trenton McKinkley were called: he had moved his hand and feet. 'It is a miracle,' said the teenager's mother.

Meanwhile, the boy makes things reasonable under circumstances. His recovery is steady.