Home / World / Brain behind the killing of environmental activist caught 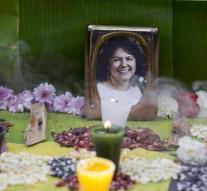 tegucigalpa - Two years after the murder of the prominent Honduran environmentalist Berta Cáceres, the police arrested the presumptive leader behind this case. At the time, the suspect was director of the energy company Desa. According to the Public Prosecution Service, he has given one of the perpetrators the opportunity and the means to carry out the execution.

Meanwhile, nine people are stuck on suspicion of involvement in the murder. Cáceres committed to the rights of the Lenca Indians and fought against the construction of the controversial hydro power plant Agua Zarca by the company Desa.

For her work as coordinator of the council for indigenous peoples in Honduras, she received the renowned Goldman environmental prize.