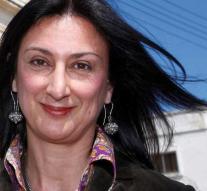 valletta - Researchers in Malta say the organizers are on the trail of the murder of journalist Daphne Caruana Galizia last October. Three people have already been charged with the murder, but it was unclear whether they operated independently.

The critical investigative journalist was killed because a bomb destroyed her car while driving. The murder of 53-year-old Galizia caused a lot of controversy in Malta and led to demonstrations among other things.