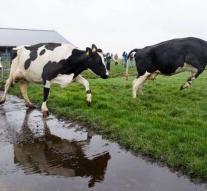 the bosch - The province of North Brabant makes a decision on major proposals for livestock farming on Friday. Among other things, the province wants farmers to modify their old stables by 2022 to reduce ammonia, stench and particulate matter emissions.

With 700,000 cows, almost 6 million pigs and 27.7 million chickens, Brabant has the largest concentration of cattle in the Netherlands. The inconvenience in the countryside continues to cause high spirits.

According to the proposals, the Brabant cattle breeder is getting stricter requirements than competitors in the rest of the country. The plans have caused fears among farmers especially. They fear that they must make expensive investments, keep less profits or even force them to stop. As a symbolic protest, angry farmers deliver a large wrench to the provincial house on Friday.

There is probably a great interest for the meeting of Provincial States. The debate is therefore on the square for the county house on a large screen.