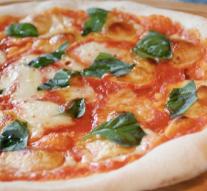 At the first order got the pair change back, but the deliveryman came to return to the pizzeria behind that it was a counterfeit banknote. When the boys shortly thereafter draw proved to have and placed a new order, the police turned on.

Upon delivery boys charged again with a fake bill of 50 euros, and the duo was arrested. Made against them, police report and their parents have been informed, police said. For a look at the bedrooms of the boys no other counterfeit money was found.