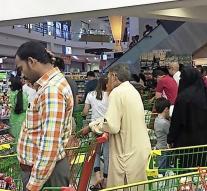 doha - The world's richest country has been hamstring. Qatar is fearing food shortages now declared to be paralyzed by much of the Arab world because of its ties with muslim extremists. The confrontation between the allies of the West may have far-reaching consequences for the struggle against Islamic state, the war in Syria and even the World Cup in 2022.

Qatar suddenly is in great isolation. His citizens must leave a series of countries within two weeks, their diplomats within 48 hours. In addition, the oil state has only one land border, which is now thrown by Saudi Arabia.

Like the Bahrain and the United Arab Emirates, the kingdom has also closed the sky. With disastrous consequences for Qatar Airways. The airline must now make a major detour.

Qatar is more than 90 percent dependent on food imports, mostly via Saudi Arabia, but they are now largely shut down. Building materials for the eight football stadiums can no longer reach the country.

Qatar maintains close contacts with Hamas, the Taliban and other Muslim extremists, some of whom are affiliated with the Al-Qaeda terrorist organization.

It is also an important financier of Muslim Brotherhood, which, according to critics, is promoted by the Qatar satellite transmitter. That form of political Islam is a thorn in the eyes of countries such as Egypt and Saudi Arabia.

The Gulf states, in particular, also deny that Qatar has reasonable links with arch enemy Iran, with whom it shares the world's largest gas field. Qatar now has the choice to bind or push Iran (which has already offered food aid), Turkey and Russia.

The hard actions of Saudi Arabia, Bahrain, the Emirates and Egypt yesterday (partly followed by Maldives, Libya and Yemen) come after Donald Trump's recent visit to Riyadh. Since then, these countries have become increasingly assertive, presumably reinforced by Trump's words, who have declared Iran to be an enemy to their great pleasure.

The current confrontation with Qatar, however, can negatively outweigh the war against IS as the nerve center of US air campaigns in Syria and Iraq is in the oil state. There are tens of thousands of Americans stationed.