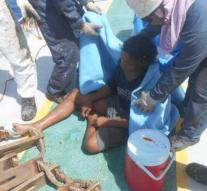 jakarta - A 19-year-old boy survived 49 days on a loose raft at sea that drove thousands of kilometers.

Aldi Novel Adilang had a very lonely job, 125 kilometers off the coast of North Celebes. He guarded a fish trap under a raft with a cottage. Once a month he had contact with the homeland via a walkie-talkie. With a generator he provided light that should attract fish. The raft was attached to the seabed with a rope. He was visited every week by the owner of the raft. He picked up the fish and took supplies for the guard for the coming week.

In mid-July he landed in a severe storm and drove thousands of miles away from North Sulawesi to the waters near Guam. His food and drinks were already long gone, writes the Jakarta Post.

A ship under Panamanian flag eventually picked it up. Aldi said that during the last days he had seen several ships passing by, but no one responded to his sound.

Aldi has survived by eating fish and claiming to lick water from his clothes he occasionally plunged into the sea. When the gas was out, he started to use the raft as firewood.

Meanwhile Aldi is back with his family in Manado. He would have come all the way to strength.