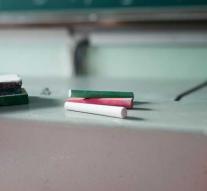 antalya - A court in the Turkish province of Antalya sentenced a 16-year-old boy to four years and six months in prison, because he had kissed a 13-year-old girl at school. The newspaper Hürriyet reported that the boy was found guilty of sexual assault.

The boy and the girl had kissed and cuddled each other in the schoolyard. A student had made a film of that. That was in the hands of the authorities, after which a lawsuit followed.

The student who had made the video of the kissing teenagers had been charged with sharing 'inappropriate images. 'He has been acquitted.