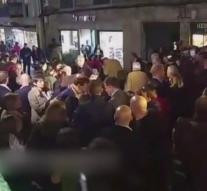 - A 17-year-old boy, the Spanish Prime Minister Mariano Rajoy Wednesday punched in the face. The incident happened in the city of Pontevedra in Rajoy's election campaign. The prime minister went bruises.

The irascible stood beside the Prime Minister when he was a group of people to help. On TV footage shows how he suddenly pulls. The prime minister was hit hard in his jaw and fell. He was helped up by bystanders alike. The teenager was arrested by police and handcuffed. When he was discharged, he stuck his thumbs up.

Conservative Prime Minister Rajoy did not know himself and appeared later that day smiling on another campaign meeting in the city of La Coruna.

The Spanish Government and leaders of the opposite condemned the boy's attack.

Rajoys party, the Popular Party, according to polls remains the largest party in Spain, but probably will after years of cutbacks in education and health care get no majority next Sunday.