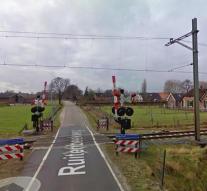 lunter - An 18-year-old boy from Lunteren was accidentally injured on Sunday on a railroad crossing on the Ruitenbeekweg in his hometown. The boy had come to the railroad with his unknown driver. The police assume an accident.

A 58-year-old man from Wekerom has still tried to get him off track. In addition, he was surprised by an oncoming train, and was also hit by it. The man was taken to hospital for treatment.

The train has made an emergency stop. Passengers are further transported by bus.