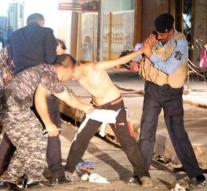 - A boy of twelve with a bomb belt is Sunday in Iraq arrested in the city of Kirkuk on his way to a mosque to blow themselves up. The child wore a loose shirt of FC Barcelona to cover the explosive. The arrest of the boy was shot.

Agents gripped the boy and were able to bring the bomb belt on his body. The explosive was later controlled detonated. According to local media, there are other places in town Sunday night or committed suicide. Three people were injured.

Saturday blew a boy of about 13 himself during a wedding in the Turkish city of Gaziantep. The number of deaths caused by the attack has been increased from 51 to 54. At surveillance cameras to see that the child was accompanied by two people. Minister Recep Tayyip Erdogan suspects IS behind it.