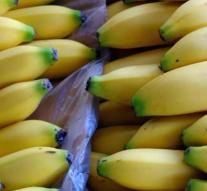 lochristi - A member of the Delhaize supermarket in Lochristi, Belgium, found eight bags of white powder on Sunday morning between the cardboard of a banana box. 'The police suspect that it is cocaine,' says manager Danny Van Assche. Research must show whether that is correct, and how the drugs have ended up there.

An unsuspecting staff member went to pick up a Chiquita box at the Delhaize warehouse in Lochristi on Sunday morning to supplement the racks in the department store. Manager Danny Van Assche: 'Jelle noticed almost immediately that between the two layers of cardboard were eight white bags, all filled with white powder. '

Employee Jelle put aside the bags. Van Assche was informed by his staff on Sunday morning. 'I immediately called the Lochristi police. Two agents came to pick up everything. According to them, it is almost certainly about cocaine. '

Van Assche weighed everything on a scale in the store. 'Just no kilogram. The loot must therefore have a street value of 50,000 euros. Or more when it comes to pure cocaine. 'Then the street value could rise to 100,000 euros.

The manager has had a Delhaize for twenty years and did not participate in this. 'I have never heard such a story told by colleagues. 'Drugs are usually discovered in (air) ports when they reach the mainland.

'These bananas came from Columbia. We could read that on the box ', says Van Assche. A country that plays a leading role in the cocaine trade. 'After their arrival, the bananas have probably been matured for two weeks at our supplier in Evergem, but the boxes are not being opened. '

Van Assche wanted to get rid of the stuff as quickly as possible. 'Had the money been, I could appeal to the honest finder's right,' he says with a laugh. 'But here I want to have as little to do with it as possible. Before you know it, you are also responsible. '

The police of the Puyenbroeck zone only confirmed Sunday that white powder was collected at the Delhaize branch. 'We can not give more information. '