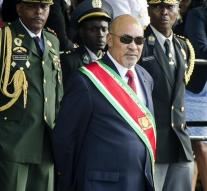 It is a special secret meeting in which issues can be discussed as state security. According Bouterse is in Suriname question of a constitutional crisis and he would inform parliament behind closed doors about the current state of affairs regarding the December Murders trial.

The president believes that the state has been compromised by the decision of the court martial. The board decided in early June to explain the controversial Amnesty Law does not apply to this trial. By that statement, the December murder Process, which Bouterse is the chief suspect, resumed after a suspension of four years, most likely on Thursday.

The acting president said the Court of Justice that there is no crisis and that the rule of law is not in danger. A crisis may never occur on the basis of a ruling by the court-martial, he said. The Attorney General has stated that decisions of judges should always be respected.

The process revolves around the murder in 1982, fifteen opponents of the then military regime of Desi Bouterse.