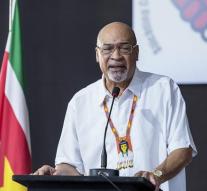 paramaribo - Surinamese president Desi Bouterse does not mind the position of the Supreme Executive of the Public Prosecutor (OM). Bouterse earlier said the trust in the Attorney General. Following a conversation that the two started this week, Bouterse would have revised his position for the 'higher national interest'.

That writes the local media Starnieuws. The resolution in which Bouterse and his ministers resigned in Roy Baidjnath Panday have now been formally withdrawn.

At the end of last month, it demanded 20 years of cell against Bouterse for his involvement at the December killings in 1982.

The possible dismissal of the attorney general led to indignant reactions in Suriname. The members of the OM asked the president to review the decision 'to prevent further violation of the rule of law. '

The Surinamese Order of Lawyers (SOVA) stated that neither the Surinamese government nor President Bouterse could dismiss the Attorney General. Indeed, the boss of the OM is appointed for life. And that must guarantee that the OM remains independent.

The lawyer of the relatives of the victims of the December and the opposition parties also expressed a negative opinion about the decision to resign in the Attorney General. The bishop of Paramaribo responded with 'great concern' to accusation to the attorney general that he would have shown 'misconduct' just because it had expressed the penalty for Bouterse.

In the trial of the December killings, it is about torture and shooting in a military crusher of fifteen opponents of the then military regime in 1982. The regime was led by army leader, and now president Desi Bouterse.