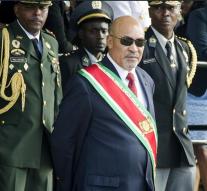 - Suriname, the representatives of the international community and the Union of South American Nations (UNASUR) Monday informed the 'constitutional' problems in the country.

Reported that the government of President Desi Bouterse Tuesday. Last week he had already informed the Surinamese parties about the situation.

After consultation declared the Secretariat of UNASUR Tuesday that the organization makes about the situation in the country concerned, but that the actions taken by President Bouterse, will support.


The constitutional issue where according Bouterse talk of is, is a result of the decision of the court martial to let go by the December Murders process. In this trial Bouterse is the chief suspect in the murder of fifteen prominent Surinamese in December 1982.