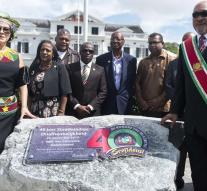 - Only if countries are independent and autonomous, they have the chance to grow and become richer. That never works if there is a colonial power, then indeed all proceeds go to the motherland. Therefore it is good that Suriname forty years ago on November 25 gained independence from the Netherlands.

That said President Desi Bouterse Wednesday in Paramaribo during a special meeting of the Suriname parliament on the occasion of the celebration of independence. According to Bouterse 's sovereignty of nations is important for a fair distribution of wealth in the world.

In that framework, the Surinamese president is worried about the arrival of the Transatlantic Free Trade and Investment Convention (TTIP) where America and Europe to negotiate. According Bouterse will lead to a treaty to Western supremacy. " If Suriname we must study this well. It means that our sovereignty is under pressure ", said Bouterse, all Surinamese called to be involved in the country, especially now there are big economic problems.

The Dutch foreign minister Bert Koenders has congratulated Suriname. He called the Surinamese independence 'is an important milestone in the history of both countries. " According to Koenders, the countries despite the highs and lows are inextricably linked. " Netherlands and Suriname have because of the culture, language and history are still strong ties. One way or another, are about one and a half million people are directly related. "