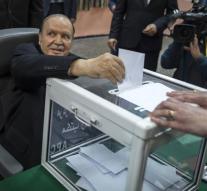 - Algerian President Abdelaziz Bouteflika has Thursday unexpectedly shown publicly. That is quite exceptional since he suffered a stroke three years ago. Bouteflika in Algiers opened a conference center. He drove into the complex around in a wheelchair.

The public appearances of the 79-year-old president has become so rare that the opposition wondering aloud whether it would be better to organize new elections and not to wait until 2019, ending his fourth five-year term. Opponents believe that the health of Bouteflika is worrisome to lead the largest country in Africa, major exporter of gas to Europe, yet.

According to political analysts, his sudden appearance, the first in two years, an attempt to call to make an early presidential election silence.