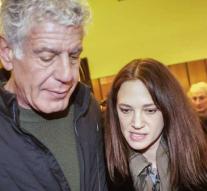 - The episodes of Anthony's Bourdain show Parts Unknown in which his girlfriend Asia Argento was shown, have been taken offline by CNN. The actress, who turned out to be one of the voices of the MeToo movement, is accused of sexual abuse of a minor.

'In the light of the recent news reports about Asia Argento, CNN is stopping broadcasting old episodes of Parts Unknown with which it was involved, until further notice', a spokesman for CNN told People. The station broadcast the old episodes via regular television, and offered the episodes online.

Anthony and Asia met in 2017 in Rome, where he was for recordings of his culinary travel program. The actress was shown in the episode around that city and in a broadcast about the south of Italy. She also directed an episode of Parts Unknown that took place in Hong Kong. Asia and Anthony stayed together until he robbed himself of life during TV recordings this spring.

Last month, the New York Times discovered that Asia paid off someone who accused her immediately after her own abuse increases at the address of Harvey Weinstein. She gave Jimmy Bennett $ 380,000 in exchange for his silence. The former child actor, who once played Asia's son in a film, claims that the two sex initiated by the actress when he was 17 years old. She denies that, and states that Anthony paid the money to help Jimmy.