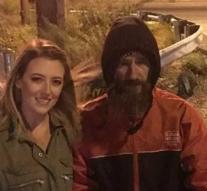 philadelphia - A 35-year-old homeless sleeps on the street again after a woman started a crowdfunding campaign to buy a house for him. The American raised no less than $ 400,000 and then all made beautiful trips with her partner. A brand new BMW is also on the doorstep.

Johnny Bobbitt had twenty dollars last November when he met Kate McClure. She no longer had gasoline and was on the side of the road. Thanks to the helpful and generous homeless, she could continue her way. She was very grateful to him and wanted to do something for him.

A GoFundMe page was created and the news went all over the world, after which McClure was even allowed to talk about the action in the popular TV program Good Morning America. She told the life of Bobbitt completely want to change. The 35-year-old American would get a house, a car, a 'salary', a pension and financial help. The money poured in.

However, the $ 400,000 that was raised was not spent on a house. Half of the money was spent on a camper, a car, hotel accommodation, a television, laptop and two mobile phones. Bobbitt also received $ 25,000 in cash. Here he bought drugs, according to the couple. That the former homeless had also robbed them, was the drop for the couple. He was taken out of the camper van, after which his stay was sold, just like the car.

In the meantime, the couple made several trips. For example, McClure and her friend Mark D'Amico visited Las Vegas, Los Angeles, Disney World and made an expensive helicopter flight in the Grand Canyon. The photos were shared on Facebook. The couple also bought a brand new BMW. All of this is their salary, according to McClure. She is herself a receptionist and her friend construction worker.

The homeless Bobbitt can not get to the money that is left, if it's worth 200,000 dollars. It was his dream to use the money to leave Philadelphia and buy land in 'home state' North Carolina, he tells The Philadelphia Inquirer.

He is now sleeping under the bridge again. 'I feel cheated. I think they had good intentions, but they got greedy from so much money. 'GoFundMe investigates the case.